If I could give them more stars I would! I went there to get moulded ear plugs and ended up coming away with their own version of in-ear monitors, which were suggested as a cheaper alternative to the super-expensive professional types. These could be changed from in-ears to normal plugs by swapping the in-ear headphones with the filters supplied. When I got them home I was having some trouble with the plugs and when I contacted them about this they remoulded my ears and offered me a solution with a different type of plug, free of charge! I can’t sing the team’s praises enough and if you are looking to prolong the life of your ears then look no further than Northwest Hearing!

“I have used other hearing aids for many years but my new Lyric hearing aids have had an incredible impact on my hearing.  The clarity of my hearing has increased my quality of life.  I’d recommend North West Hearing without a doubt, the staff are brilliant and helpful”

“I’d recommend North West hearing without hesitation!  The staff are absolutely great, couldn’t be nicer.  I first noticed my hearing loss about a year ago, but since having my new hearing aids I’m more confident and I feel more like me again!”
Jacqueline Buckley

“I first realised I had a hearing loss when I was 5, but waited until now to try the Lyric hearing aid.  When I first had it fitted I was amazed, it has made me more confident, I would recommend North West Hearing.”
Carole Ann

“I noticed my hearing gradually deteriorate over a few years. I decided something had to be done when I had trouble hearing the warning beeper as I was turning the garage alarm off.

I visited two hearing aid specialists who both offered me over the ear aids, these were not acceptable to me as I am a very vain person.

Eventually I went to see an NHS audiologist and was given over the ear aids. Once again they were too large and I was reluctant to go out wearing them – defeating the object of having them!!

I read about the Lyric aids and contacted North West Hearing. They are completely invisible in place, just what I wanted.  I had a few problems with them, but Greg was very patient with me, and I persevered with them. After a few months it was decided they were not for me. Knowing how vain I was Greg found a new, small, in the ear aid. I have never looked back and wear them all the time.

I could not have had better advice from Greg and Sam at North West Hearing who were always at the end of the telephone if I had any problems or needed some advice.

Would I recommend North West Hearing? Without a doubt.”

“My GP suggested I contact North West Hearing to get my ears cleared of wax urgently because the blockage and the loud buzzing was making me feel increasingly anxious and unbalanced. Sam immediately reassured me that I would get sorted soon – this was on a Friday and my appointment was made for Monday – big relief!! At my appointment, Greg was very understanding about my situation as I already have tinnitus and I was worried it would make it worse. He used the most reassuring method and I was feeling great in minutes. He also gave me lots of positive things to think about with regards to the management of my tinnitus and I feel much more confident about the future now. I feel quite inspired to make some positive changes – thank you SO much!”
Helen Stevenson

“I was recommended to North West Hearing by a work colleague.  I wanted to try the invisible Lyric hearing aid, I had tried various hearing aids over the years but always ended up not wearing them and leaving them in a draw.  I rang North West Hearing and got an appointment later the same day.

I had a hearing test which was more detailed than I have had before, I was asked various questions on lifestyle etc. and it was decided I was suitable to take the 30 day free trial.  As soon as I was fitted the difference was unbelievable; walking to my car I heard noises I’ve not heard for years. Walking into a crowded room was slightly over-powering at first but I soon got used to it; I’ve had them for 2 weeks now and have adjusted really well.  I have had to go back to North West Hearing a couple of times for adjustments my left side was slightly uncomfortable, this is where NWH come in to their own.
No sales pressure – I was able to try different products with 30 day free trial – quick repeat appointments including one time out of hours – total understanding of customers needs – on-going ear care – first class service with a great support team” James Kight

“My first awareness of an impairment in my hearing was probably as much as 20 years ago although I took no remedial action until about 10 years ago. I tried ‘in ear’ and ‘behind ear’ hearing aids from both Specsavers and Boots.  Neither gave me the result that I was looking for and I must be brutally honest and and admit that vanity also played a part in my rejection.

When I heard about Lyric I was keen to try and must say that I was bowled over with the results.  Had I really been missing all those sounds for so long, especially high frequencies. I no longer leave business meetings knowing that I missed maybe 50% of what was going an and can have conversations in the car, either as driver or passenger, without the ever embarrassing ‘say again’.

Both Greg and Samantha are a delight to deal with and my only reservation is the restriction on opportunities for battery changes.  This is however, a very minor issue.

I have recommended NWH to a number of friends and will continue to do so”. 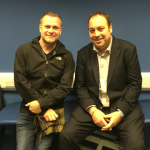 “So pleased that Musicians Hearing Services has now opened up in Manchester, saw them while Simply Red on tour this week” Ian Kirkham – Simply Red Saxophonist. Pictured is Ian Kirkham and Dr Greg Nassar.

If you’re a DJ or a muso and you’re reading this and thinking ‘maybe its time I got some earplugs…’, hold that thought and listen: there is NO ‘maybe’ about it. I cannot stress to you how important it is to protect your ears, they are your living, and they are under almost daily barrage.

I’ve been on tour with The Prodigy and played gigs so big the monitoring is 30,000 watts of sound, but if you’re thinking ‘I only play little gigs’ it’s often those sh*tty little sound systems at Camden Monarch or some bar that will cause the most damage.

One day, years ago, my colleague Erol Alkan told me he’d lost 40% of the hearing in one of his ears and that he’d just discovered Geraldine and Paul at Musicians Hearing Services.

That recommendation changed my life. I’d get tinnitus SO badly after every gig, that I couldn’t sleep, and I’d be ill as a result. My immune system was shot through and I was a mess.

Since getting MHS to sort me out with plugs, I carry them EVERYWHERE and use them at big gigs, little gigs, parties, anywhere with a sound system. Now I sleep, I’m healthy and my ears aren’t getting any worse despite my job.

They make it easy, they are nice people, they’ll even get rid of that horrid build up of years worth of wax for you.

The plugs come in varying degrees of sound reduction and they just reduce it, not muffle it like those spongy yellow ones you can get for free at festivals. You’ll still hear the sizzle of a hi-hat and the boom of a kick drum, just at less damaging volume.

Now if you’re final thought is ‘hmmm but its quite expensive…’ Stop. Its the best money I EVER spent.

Do it now. You will not regret it. Just guard them with your life!

PS – just one more thing – if you’re thinking ‘this is one of those free plugs for a plug thing…’ NO. This is from the heart and I paid the same for my earplugs as you will pay for yours.

Manage Cookie Consent
To provide the best experiences, we use technologies like cookies to store and/or access device information. Consenting to these technologies will allow us to process data such as browsing behaviour or unique IDs on this site. Not consenting or withdrawing consent, may adversely affect certain features and functions.
Manage options Manage services Manage vendors Read more about these purposes
View preferences
{title} {title} {title}